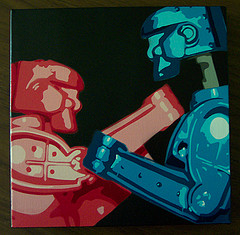 After this bout, on Friday morning, the final will be set.  No beating around the bushes today, let's get to it!  Leave your votes in the comments below.  Everyone has a voice, so spread the word!

I watch the girl as I have every day for the last five days. She moves around the outdoor patio of the restaurant while balancing a drink-loaded tray. The effort forces an small, apple-sized bicep to form in her slender arm. I imagine her shiny black hair falling to her shoulders as the red stick holding her careless knot bobs lazily. The girl drops her pen and moves to place the tray on an empty table.

As she bends to retrieve it, my eyes meet her almond-shaped dark ones for an instance, and I look away. I'm not quick enough and recognize that she's angry.

Does she think I am stalking her? Probably. I'll have to skip a couple of days. I don't want to scare her. And then again, she doesn't actually look scared. She looks angry with a touch of curious.

"Can I get you anything else?" The waiter, a man with thinning hair arranged across the top of his head, holds the black restaurant bill folder in his hand. I can tell that he wants the table for his next customer as I look around at the crowded tables. He drums the edge of the bill folder with his neat, thin fingers. I can see the speculation in his eyes as they move over my t-shirt and holey jeans. His eyes say, "Doesn't this kid have a summer job?" The waiter smiles, but it's a fake smile that matches his equally fake tan.

"No. Just the check." I steal a glance in her direction for fear that she will disappear into the crowded dining room inside. It's too late and she's gone.

I glance at the ticket that's been placed in front of me and retrieve my wallet. Throwing a couple of bills on the table, I take one last sip of my water and crane forward, looking through french doors into the dining area.

Her husky voice electrifies my senses. I've heard it in my dreams hundreds of times. I don't answer immediately. My rehearsed line tumbles from my brain and is lost.

I turn after a measured second that seems like hours. "I have a proposition for you." The words are all wrong. Her proximity makes me nervous that she will read my mind and know.

She laughs, a brittle sound that doesn't match what I know of her. In my dreams, she is all sweetness. It startles me when she places her hand on the back of my chair and leans down to whisper. "Listen, creep. I will say this one time. You show up here again and my brother will take a sharp knife to your tender and delicate places. Capiche?"

The juxtaposition of her words and what I know of us is almost more than I can stand. I wish to start over, but there's no beginning that would be right.

"Seiko, I need your help." I think of the photograph in my wallet.

They say that when you're about to die, your whole life flashes before your eyes.

Turns out it's true.

I sprawl in a pool of my own blood. The sky comes in and out of focus, and it's an unnatural color, like a bruised plum. Bombs explode to my right, spewing smoke tongues that smother the earth. Two men hover over me - Lieutenant Daniels and that baby-faced soldier who cried the night we got deported. I think they're trying to staunch the oozing wound on my thigh, but I'm not too sure.

My mind is going. Lying there on the battlefield, all I can see is Molly. Molly wearing her Dodgers cap in the kitchen, making breakfast, telling the dog to get down, stay there, good boy. Peter! Emily! Hurry up or you'll be late!

Wagging tail. The crisp smell of cinnamon French toast. Backpacks zipping. Sneakers skidding because the bus is pulling around the corner. Shit, I'm going to miss it! YOUNG MAN, don't ever let me hear you say that word again! Giggles. Peter said a bad word, Mom.

Little arms thrown around my neck. I love you, Daddy. I love you too, sweetheart.

The baby-faced soldier's voice slices through my delirium. "He just call me sweetheart?"

"Don't flatter yourself, son. He's feverish. Hand me that bandage."

Lieutenant Daniels' ruddy face appears. "Jackson. You're gonna be all right, you hear me?"

A church decorated in red, white, and blue. My father lying there in his coffin. I kiss his cold forehead, the way he used to kiss mine when I was sick. I love you, Dad. My turn to fight for peace. I swear I'll make you proud.

San Francisco Bay, holding hands with Molly, heart racing because I'm about to ask her to marry me.

The doctor's office with Pat, my frat brother, my football buddy. The cancer will take me over, Jackson. No, it won't, I won't let it. You're gonna be just fine, Pat.

"Don't count him out yet," Lieutenant Daniels says.

As if on cue, I sit up. Everything, everyone I love. I don't know if I'll see any of them again. But there's still breath in my body. Where there's breath, there's life. And where there's life, there's fight.

"Jackson. Get down, we need to clean that wound!"

I crawl out of our hideout. Dragging my bad leg, I sling my gun over one shoulder.

There's a small army of them, tongues lolling from their lifeless faces. Green skin curdled like bad cheese. Slowly, they lurch toward me with sickening hunger, moving around the mutilated bodies of my fallen comrades.

I imagine them bending over Molly, the kids cowering in the doorway.

I load my gun.

They want my brains. I want them dead. Even deader than they already are.

"YOU'RE GOING DOWN, BITCHES!" I scream.

I throw myself at the zombies. 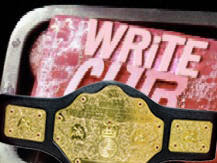