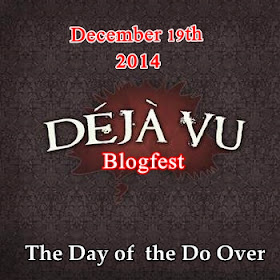 Today is the day where we re-post one of our blogs from 2014.  It can be your favorite, or one that you wrote during a busy time (A-Z Challenge, WRiTE CLUB, NaNoMo, etc.), or just one that you feel deserved more attention.  Whatever the reason, this is your chance for a do-over.  If you wish to see who else is participating in this awesome event...HERE is where the linky list is located.  It's not too late to sign up either.

My Deja Vu post originally aired on January 30th, and you'll soon see why I chose it.  Enjoy! 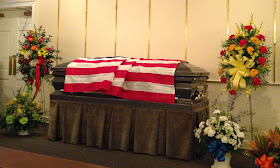 Over the last year or so my dad’s health has slowly deteriorated and he finally ran out of fight early in the morning, January 22nd. We held the funeral services this past Monday and I have to say it was wonderful ceremony. My sister-in-law and brother-in-law both stood up to share some beautiful words of remembrance, and I offered a few thoughts myself.  I wanted to share them with you here today so you might help me in honoring what were both a wonderful man…and father.
I hope to be back amongst you soon.  Until then, be safe and secure. :)

I want to start off by thanking everyone for coming out today.  I know that Dad…as modest as he was…would be surprised to see this kind of turn out. For those of you who don’t know me, I’m one the quiet one in the family - but somehow I keep finding myself up here.  After our mom passed, dad came to me and asked if I wouldn’t mind saying a few words for her at the funeral.  As strong as he was, I guess he knew he wouldn’t be able to remain composed enough to do it, but somehow he thought I could.  So here we are again, but this time he’s not around to ask me…but it seems right.  Hopefully I won’t disappoint him.

What’s been great over the last several days, especially last night, was hearing all of the stories about dad and how much he genuinely affected the people he came in contact with.  As I listened to everyone, two distinct themes kept recurring over and over.  One was CARS…and the other was how people’s impression of him changed once they got to know him better.  Dad could be quite an imposing figure…downright scary when it comes down to it…but all it took was just a little time with him to discover the teddy bear just below the surface.  Don’t get me wrong…dad could be dominating force when he needed to be.  As one of three boys growing up…believe me…I can attest to that.  But once you got by that gruff exterior you couldn’t ask for a better brother, father, son, and friend.

I think it was fifteen years ago…Mom and Dad were living in Georgia at the time…I wrote them both a letter.  I sent it for no other reason than to thank them for being such wonderful parents.  I couldn’t say it to them in person because I knew I would choke and mess up half of what I was trying to say.  You know what it was?  Have you ever had one of those moments when you figure something out that’s been right there in front of your face the whole time, but for whatever reason it’s eluded you until it finally crystalizes in your mind?  Something that makes you go…HUH!  I had one of those when I realized that you can’t really understand your parents until you have children of your own.  You get part way there when you get married, but you don’t really fully appreciate them until you’ve experienced parenthood for yourself.  My wife Kim was expecting our third child at the time and I was seeing my parents in a whole new light, so I needed to tell them thank you.  At the same time I was beginning to understand something else about dad.  He had a way of teaching, influencing, giving direction without you knowing that’s what he was doing.  He was the master of subtlety and making you believe you’ve figured something out for yourself.

Let me give you an example.  We’ve already mentioned cars, so let’s use that.  I can remember vividly being with dad underneath one his cars parked in front of our house in Cherry Point.  It was cold outside, a light rain was falling, there were pea-sized gravel boring holes into the back of my head and I wanted to be anywhere but there.  We were trying to remove a starter and there was this one obstinate bolt that was impossible to get to and couldn’t get a ratchet on it.  We worked for hours and hours trying to get that bolt off…me getting angrier and angrier as time went on…when suddenly it came loose and the part was free.  I learned two things that day, the first, there was NO WAY I wanted to have anything to do with repairing cars when I grew up.  But the second thing I learned…without dad saying a word…was determination.  Tenacity.  Sticking with things to the end.  HUH!

I also learned from him that sometimes it’s what you DON’T say that really matters.  I can’t ever recall dad voicing derogatory remarks about anyone.  I’m sure he had some…don’t we all…but he mostly kept them to himself.  Sometimes I would even try to bait him…ask him a leading question about someone I knew was ripe for ridicule, but he’d just ignore me or change the subject.  HUH!

He showed me that commitment wasn’t just a goal or something to strive for.  It was a duty.  Twenty-four years in the military.  Twenty years at AT&T.  Married for Fifty years.  The man was a constant…for everybody, but he never once bragged about it or hinted that was what a successful career was all about.  HUH!

I told a story at mom’s funeral about how I came home from college one day…heartbroken from a breakup with a girl…and poured my eyes out to mom who just calmly stroked my head and told me everything would be alright. After a while she said she needed to go to the grocery store and she drove to the nearest gas station and poured her eyes out over the phone to dad.  What I didn’t say then was that there’s a part two to that story.  It wasn’t much longer after mom returned that dad showed up at the house.  I asked him what he was doing home so early and he told me that he had this van he had been tinkering around with and since he heard I was home he’d like to take advantage of that and get me to help him with it.  I said sure…still kind of numb…so he changed his clothes and we set about tearing into the engine.  After a while mom brought us sandwiches and drinks and we ate in silence. When it turned dark and he brought out the flood lamps so we could keep going even longer.  We must have worked on that car until past midnight…and you know what…to this day I have no idea what we did to it.  But during that time dad never said a word about my break up, or asked me probing questions like “so, how’s everything going?”  It wasn’t until years later that I discovered mom had told him, but that night when I finally climbed into bed, I fell right asleep and rested peacefully.  HUH!

The last few weeks of dad’s life you could tell he was doing his best to put on a brave face, though he was struggling and deeply discouraged.  We all were doing our best to encourage him …convince him that all he needed was to have just a couple good days in a row, that’s all it would take for him to turn the corner and he would eventually be on his way to coming home again.  But we were wrong…and once again dad found a way to show me what was right.  I was with him that last night.  He was having a relatively peaceful evening.  His nurse and I were reconnecting some leads he had pulled loose in his sleep when suddenly he sat up in his bed and sneezed hard, four times.  Instinctively three words popped into my head and before I could say them out loud…he was gone.  Later on I was trying to make sense out of what had happened…that he was truly gone…experiencing a variety of emotions all at once.  Then I thought of how weird it was he sneezed like that…four times…once for my older brother, once for my younger brother, once for my little sister, and once for me.  And those words that were on the tip of my tongue that I never got to say…God Bless You.  HUH!

Sometimes we tend to associate meaning to things for reasons that make no sense, and I may be guilty of that here, but in my mind dad found a way to put my mind at ease with a little bit of help.

I love you dad…we all do…and we’ll miss you terribly. Give mom a hug for us.