O is for Overcoming 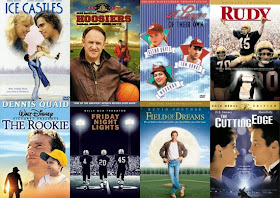 I love sports movies!  Really, I’m fanatical about movies in general, love them almost as much as books, but movies that revolve around sports stand apart as my favorite.  The Natural, The Miracle, Eight Men Out, Field of Dreams, Hoosiers, Mystery Alaska, Sandlot, Angels in the Outfield, Raging Bull, Brian’s Song, The Cinderella Man, The Champ, Rocky, A League of Their Own, Major League, Jerry Maguire, Remember the Titans, Seabiscuit.  I can go on and on and on.  I think what I love most about these movies is the inspirational undertone that they all have in common.  But today’s diatribe isn’t about movies, rather just two films in particular and how their message serves as a backdrop to what each of us struggle with.

The first one is The Rookie, a 2002 movie starring Dennis Quaid as an aging high school baseball coach who comes to realize his dream of pitching in the major leagues.  The other, Rudy, is a 1993 classic depicting the struggles of Daniel “Rudy” Ruettiger (played by Sean Astin) to play football for the university of Notre Dame.  Both of these films are based on true stories.

I bet you can already see where I’m going with this.  You’d be mistaken.

Both of these characters, although from opposite ends of life experiences, had to overcome steep odds to realize their dreams.  For Jim Morrison (the actual rookie), it was the fact he was thirty-five years old and been out of baseball for many years.  For Rudy, it was both his physical limitations combined with the lack of money and grades to gain entrance to the school he idolized.

As writers, aren’t we in the same position?  Each of us faces crushing odds that tell us our chances of actually breaking into the publishing world are slim.  Yet we show up to practice every day, running the laps, doing the drills, studying the first stringers, perfecting our technique, preparing, doing everything we can to prove our readiness.  Each query letter we send out is a plea, “Put me in coach.  I know I can play!  Let me prove it to you”

Both of the men in these movies I mention ultimately realized their dream…although in dramatically different fashions.  Jim Morrison actually made it into the MLB and spent two seasons pitching for the Tampa Bay Devil Rays.  Rudy played for the University of Notre Dame football team for two plays.

In the end, the key difference between the two stories…skill.  Jim Morrison threw a 98 mph fastball (with control), Rudy was only 5’6” and weighed 165 pounds with average speed.  Rudy was immortalized for the grit and determination it took to overcome his shortcomings and simply make the roster of one of the premiere college teams in the country.  Almost as a by-product, he obtained a valuable college education and became a role model for underdogs everywhere.

I ask myself a question everyday…and I believe that same question tortures a lot of us. Which am I?  Rookie or Rudy?  Do I have the talent to make it in this industry, or am I merely demonstrating my unstoppable drive and desire.  Of course we’re all pursuing the dream of becoming the next Rookie, but what if you’re a Rudy? Would you be satisfied knowing your only accomplishment was making the players around you better?  Just brushing against your publishing dream and settling into a comfortable life on the fringe of that world…like say…a popular blogger.

What if my writing legacy turns out to be only a mention in a critique partner’s book dedication?

Can’t worry about that now…I have a game to prepare for!  Maybe…just maybe…the coach will have noticed my potential and take a chance on me today.  I’ve overcome so much already, what will it take to take the next step?