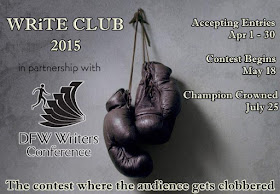 Over the past five weeks forty writers have stepped into the WRiTE CLUB ring and twenty emerged victorious. We whittled our ten winners down to five in the first the elimination round (named that way because it’s the first time winners face off against one another), now its time to send home five more. Our ten winners from phase two will again be shuffled and -- like the first bouts -- randomly matched to compete against one another with their same submission. A writer who emerges victorious from this round will earn a spot in the play-offs and will be asked to submit a new 500 sample to use in the next round. Let me remind you that our competitors are not only scuffling for notoriety…recognition…a $75 Amazon gift card…but also free admission to the 2016 DFW WritersConference, who helps sponsor this contest.

This week there will be daily bouts (M-F) between the Anonymous 500 word writing samples, submitted under a pen name by the winners of our first 10 rounds.  The writing can be any genre, any style (even poetry) with the word count being the only restriction. Today is Elimination Bout #10.  Read each sample carefully and then leave a vote in the comment section for the one that resonates with you the most.  If you didn’t have a chance before, please leave with a brief critique of both submissions as well.

This week, voting for each bout will remain open only until noon (central time) on Sunday, June 28th. The winner of each will be posted at the WRiTECLUB scoreboard.

Standing in this corner, please welcome back to the ring……..Missy Major

Sometimes the rushing hiss of a rainstorm can make the world feel like an empty shell. At least, it does today. The mug of coffee will never be able to reach the coldness I feel inside and out. Each patter of rain against the window raises a new goosebump on my flesh. A shiver starts at the back of my neck and spreads over my skin. I clasp the mug of steaming coffee a little tighter.

How long will it be this time?

The thing about Michael, that one bitter truth, is that he isn't mine. As much as I'd love to claim even the smallest part of him, it isn't a possibility. I know this. Really, I do. The most I hope is to be a fleeting thought at the periphery of his mind every so often. If I'm really indulging my fantasies, I imagine his tall frame striding into a thrift store. The sun will glint off a vase just so, or the delicate etching on an antique decanter will catch his eye and my name will whisper in his memory. Then, the moment will pass, but at least it happened.

Thunder rumbles low in the distance and I draw my robe tighter at the waist. Through the rain streaked window I watch the world dissolve into a gray haze.

It's been ten days already. Ten days without Michael. There have been much longer stretches, of course. There have been some so long that I drew deep breaths and braced myself for the shards of reality to slash him from my life forever. Yet, some unexpected evening, the key would turn in the lock and he'd stroll in looking older but more radiant than ever.

I’d mask my joy with a pretend frown. “What mischief have you been up to all this time? I was beginning to think I’d see you in the obits by now.”

His brown eyes would twinkle and we’d both laugh away the dusty collection of weeks of his absence until all that remained was cozy companionship once more.

I can’t help but smile as I think of it. It makes me wish this won’t be one of his prolonged absences, although I have nothing to do with it.

A timid throat clearing reminds me that I still have a purpose in life, separate from the whereabouts of Michael.

“Good morning, Tom!” I say, standing, as if I hadn’t already spent the morning daydreaming of Michael instead of planning the days meals for Tom. “Did you sleep well?”

“You know I get the best sleep of my life here. Finally getting to use that creative energy is exhausting!”

And in the other corner, representing the Epic Fantasy genre with 460 words, welcome back……….Kim Patterson


On the twenty-first day of his life, a baby boy wakes crying in the middle of the night. This is normal—he has woken every night of his so far short life, waving his tiny little fists, wailing at the top of his lungs, and demanding to be fed, or perhaps changed. And every night for the last twenty-one, his mother has woken upon hearing his cry, and has fed him or changed him, or whatever it seems he requires at that particular time of that particular night.

For a moment, the father wonders if it is normal? Is a baby’s hair colour supposed to change in their first few weeks of life? The father has not read the baby books; he does not know how it is supposed to work. He remembers hearing somewhere that a baby’s eyes often change colour after birth. Does hair do the same thing?

He wonders all this for a good reason: his baby boy’s blond tuft of hair has turned pure white. Is his boy abnormal? Is something wrong with him?

But no, the father reassures himself. He hasn’t spent much time around his son yet; the boy prefers his mother’s arms. Perhaps it has always been white, and he only thought it blond from a distance. Or perhaps a baby’s hair is like its eyes, and changes colour soon after birth. His son is not abnormal. He will grow into a healthy young man fit to take up the mantle he has been born into, for this baby boy is the Crown Prince of Erminia, born to the newlywed King Guilherme and Queen Mariana, and the King and Queen must not be found to have abnormal genes within their family.

But they didn’t produce an abnormal son, and the father knows it deep in his heart. His son’s abnormality will not be due to his genes; it will be a result of something much, much worse.

As the father replaces his son in the crib, he stares down at the white tuft of hair—it was always white, he tells himself, but doubt is creeping up behind him, a shadow that hovers over him for the next twenty-eight years—and he knows that the fate that befalls his son, and eventually the entire land, is his own fault.

Enjoying two talented writers at work is only part of the price of admission, now it’s up to you to decide who moves forward.  In the comments below leave your vote for the winner.  Which one tickled your fancy?  After you vote please tell all of your friends to stop by and make a selection as well.  Yes, it’s subjective, but so is the entire publishing world.  It’s as much about the readers as it is about the writers.

Next week our 10 elimination round winners will face off against one another with brand new 500 word submissions in the play-offs.  Don't miss it! :)

This is WRiTE CLUB – the contest where the audience gets clobbered!

New comments are not allowed.